Paul Prater awoke on Tuesday morning and turned on the television, only to be overcome with anger and confusion upon discovering the latest news regarding Missouri police officer Darren Wilson.

The night before, on November 24, a grand jury in Ferguson, Missouri decided not to indict Wilson for the fatal August shooting of unarmed 18-year-old Michael Brown. Wilson has since resigned from the police force.

This news from Ferguson hits particularly hard for Prater, who has personal experience with police violence in his own community. Prater’s stepson was killed by Boston police officer Mathew Pieroway in April, 2012. Burrell Ramsey-White, 26, was shot dead after drawing a gun in response to what witnesses claim were death threats from the police during a questionable foot chase in the South End. The event escalated from what was originally a routine traffic stop.

In 2013, Pieroway was cleared of any wrongdoing by the Suffolk County District Attorney’s office.

“I don’t see how in the hell these cops continue to murder our children and get away with it.” Prater said, pausing for a moment to collect himself. “If I ever spoke to (Officer Pieroway), I would ask him, why Bo? Why did you – how did you do that?”

Ramsey-White’s death is part of a noticeably high uptick in shootings involving the Boston police over the past six years. Since 2008, there have been 86 police shootings in the city, 67 (including that of Paul Prater’s stepson) determined justified. This statistic comes despite the fact that violent crime in Massachusetts has dropped 19 percent since 1987, according to the Executive Office of Public Safety.

William Evans, acting commissioner of the Boston Police Department, stresses what he sees as the regretful yet necessary nature of these shootings.

“There is nothing worse for an officer than having to hurt someone or kill someone.” Evans said to the Boston Globe earlier this year. “But when we’re threatened, we have no other choice. We’re not a department that’s trigger happy.”

Despite these claims, civil rights activists often criticize the Boston Police Department for what they see as a tendency toward both unnecessary aggression and widespread racial bias.

“These officers are trained for situations like this, and not near one of them is using the message that they were trained with.” Said Natalie Logan of Dorchester. “It seems like police officers are targeting to kill our black youth now.”

Logan, 49, says she sympathizes deeply with the family of Michael Brown, as she, like Prater, relates closely with police violence. In June of 1991, her twin brother, Nathaniel Lackland, was shot in the back of the head by Boston police officer Leo J. Ronan.

The officer claimed that he was defending himself against Lackland. According to his testimony, the 25-year-old father of three was allegedly slashing at him with a knife inside a hallway of a Jamaica Plain housing development, and Ronan fired one bullet into the back of his head. 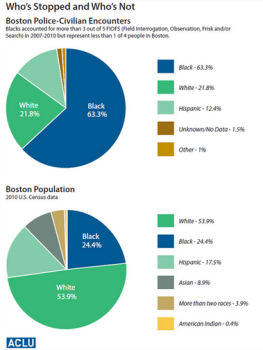 “So often we give (the police) the exact response that they are looking for, you know? And they’re just looking for it, waiting for it.” Logan said.

The Suffolk County District Attorney, which at the time was Newman A. Flanagan, determined the killing as self-defense, and thus a “justifiable homicide.” Lackland’s family filed a wrongful death civil rights lawsuit, demanding to know how he could have been shot directly in the back of the head while supposedly facing the officer.

After weeks of deliberation, in what many family members and activists saw as collusion between the Boston Police and District Attorney’s office, Ronan was exonerated from any wrongdoing. Flanagan determined that the bullet wound was a result of Lackland twisting around from a misplaced “roundhouse swing of his knife.”

“The courts are not holding officers accountable. What they’re doing is they’re causing more violence.” Logan said. “Because people are just that angry.”

According a four year study conducted by the ACLU in Massachusetts, of the 204,000 police-civilian encounters, 63 percent were involving African Americans (a group that only makes up 23 percent of the population). Not only are blacks more likely to be stopped, but they are over twice as likely to be frisked and interrogated.

Also, according to Carol Rose, executive director of the ACLU of Massachusetts, in 97.5 percent of all encounters, no drugs, weapons, or other contraband was seized. That is a 2.5 percent success rate for over 50,000 stops per year.

“This data from the Boston Police 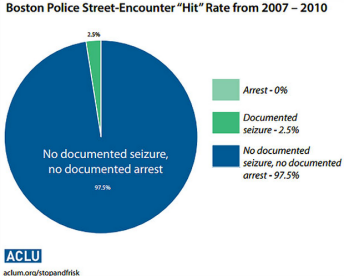 Department is clear and compelling,” said Rose, per the ACLU Massachusetts website. “Boston needs to adopt reforms to ensure fair and effective policing.”

The moment Prater learned of Monday night’s grand jury decision, he immediately felt as if his story had repeated itself in Ferguson, Missouri. In his mind, it is yet another case of an officer killing a young black man that gets “swept under the rug.” A microcosm, he says, of a greater nationwide injustice against people of color.

“When (police officers) do things like this, the law don’t hold them to the same standard as other people.” Prater said. “And they get to decide who lives and who dies in this country?” Prater’s words became very slow and deliberate, his calm demeanor almost speaking for itself.